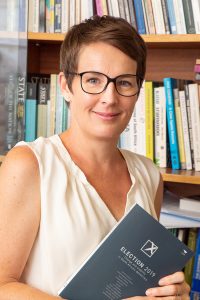 Dr Collette Schulz-Herzenberg holds a BA Hons in Politics from the School of Oriental and African Studies (London University), and an M.Sc in Democratic Governance, and a PhD in Politics from the University of Cape Town (UCT). She since completed her postdoctoral fellowship with the Centre for Social Science Research at UCT in 2013, specialising in South African voter behaviour. Collette has a growing track record in academic publications and an extensive published record in policy-based research including two edited volumes on the 2014 and the 2019 South African elections, both published by Jacana Media. Collette is a National Research Foundation (NRF) rated researcher (level C3) and was awarded a three-year duration NRF Grant in December 2018 to implement a South African nationally representative post election study following the 2019 elections.

She has 15 years of work experience in the academic and policy-based research arena, previously working as a Senior Researcher at the Institute for Security Studies in South Africa, and with the Institute for Democracy in South Africa (Idasa), specializing in issues of democracy and governance, corruption and public sector ethics, social justice and human rights, taxation, and citizenship. Collette also consults as a governance specialist for a variety of research-based and non-profit organisations in the region, and an elections specialist for South African Broadcasting Corporation (SABC) during elections.

Collette is part of a global group of scholars that implement the Comparative National Elections Project (CNEP) post-election public opinion surveys in over 30 democracies. Collette also collaborates with various scholars in the Southern African region to implement and analyse national public opinion surveys in countries like Kenya and South Africa.

Collette is also part of a project on elections, entitled ‘Crooked Politics: Vote Markets and Redistribution in New Democracies’ with the Department of Business and Politics, Copenhagen Business School, Denmark.

Collette is also extensively involved in the South African National Election Study project (SANES, with other national and international colleagues, which includes a study of voter attitudes since 1994.

Habib, A and Schulz-Herzenberg, C., 2011. ‘Democratization and Parliamentary Opposition in Contemporary South Africa: The 2009 National and Provincial Elections in Perspective’. Politikon, 38 (2), pp. 191-210.