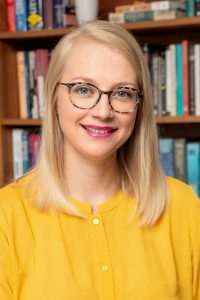 Dr Steenekamp is the co-Principal Investigator of the World Values Survey and Elite/opinion leader survey in South Africa. She is also a member of an international research team (the Transformation Research Unit) working on a project titled, Global democracy: Political institutions and cultural contexts. Her previous research collaborations include a joint research project with the University of Gothenburg, Sweden, from 2013 – 2016 titled Democracy in crisis? An analysis of (the decline of) regime support and a joint research project with SARCHI-chaired ReSEP: Research on Socio-Economic Policy at the Department of Economics, Stellenbosch University, from 2011 – 2014 focussing on the emergent middle class in South Africa.

Dr Steenekamp is the co-author of a book, several journal articles, book chapters, research reports and occasional papers and has presented her research at a number of national and international conferences as a member of SAAPS (South African Association of Politics Studies) and IPSA (International Political Science Association).

Democracy is crisis? An analysis of (the decline of) regime support. A joint research project with the University of Gothenburg, Sweden. 2013 – 2016.